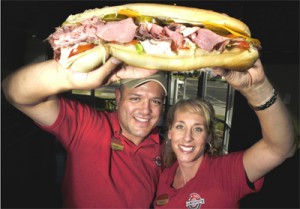 Gandolfo’s New York Delicatessen in Rancho Cucamonga is part of a national chain of 60 deli restaurants. The founder was from New York. When he moved to Utah, he discovered that he could not find a really good New York-Style deli, so he opened one in Utah and the rest as they say, is history. The restaurant is set up like most sandwich shops, except this restaurant has lots of pictures of New York and has a huge menu featuring some unique and tasty sandwiches along with salads, wraps and some incredible side salads. The sandwiches are wrapped and brought to your table in heavy butcher-like paper. Deciding which sandwich to talk about was a real chore and took a while. After flipping coins and asking a lot of questions of the staff, I decided to start with two breakfast sandwiches first, the Huevos Locos sandwich ($3.79) and the Callie Breakfast Bagel ($2.99). The Huevos Locos Sandwich consisted of a Kaiser roll stuffed with sausage, two eggs, pepper jack cheese, green chilies and salsa. The sandwich was served hot, had a nice spicy kick to it and was delicious. It sure beat the heck out of other fast food breakfast sandwiches! The Callie featured a plain bagel with smoked ham, grilled onions and cream cheese. It was served hot, and was tasty and different from most other bagel sandwiches I have had. Most of the sandwiches are available on a freshly baked 6- or 12-inch roll and are not served with any sides. The next set of sandwiches I tried were the Rockefeller Rueben ($789), the Big Apple ($5.49) and the popular Urban Cowboy ($5.49). The Rockefeller Rueben was sensational with lots of hot corned beef, Swiss cheese, sauerkraut and spicy mustard on grilled rye bread. The Big Apple Italian sandwich – with cappicola, roast beef, pepper jack cheese, feta cheese, lettuce, tomato, onions and pepperoncinis, mayo and olive oil and vinegar dressing – also was a hit. As good as those sandwiches were, the Urban Cowboy ($5.49) was the most flavorful and my favorite (along with the Reuben). This creative sandwich consisted of a chicken breast, turkey, bacon, pepper jack cheese, cream cheese, lettuce, tomato, mayo and barbecue sauce. It was served hot and was absolutely delicious! Other sandwiches that deserve your attention include the Vegetarian Madison Square Garden ($6.09) with marinated mushrooms, cucumbers, green peppers, lettuce, tomatoes on wheat bread, and, for those big eaters, the Dagwood ($9.29), which was a huge sandwich with roast beef, turkey, ham, pastrami, two cheeses and all of the usual trimmings. There are many great freshly-made side dishes to enjoy with your sandwiches but the Mermaid Salad ($1.95), with imitation crab and pasta with a wonderful cajun/lobster flavored mayo spread should not be overlooked. Ask for a taste because you will love it! In addition to Nathan’s New York-style hot dogs and lots of salads, also offered is a nice selection of creamy gelato that was a perfect ending to some really good sandwiches.