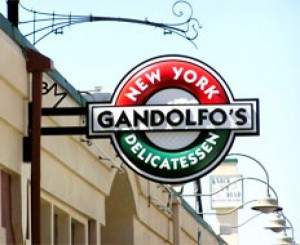 Pool’s Restaurant Group began working on a food truck franchising program in early 2010. Randy Wolken, Gandolfo’s new master franchisee in the Dallas area, is the first franchisee to take the unorthodox leap and will open several trucks before he opens his first fixed location.

Although he initially intended to open traditional stores, Wolken was so excited about the truck idea that he’s adopted mobile units as his marketplace entry point. Spending about one-third of what he would to open a brick-and-mortar unit and inheriting the flexibility to find engaged clientele and active sites, Wolken says he is excited about the possibilities.

“From the owner-operator stand point, you’re talking about higher net revenues, lower upfront costs, and the ability to react quickly to locations [with a mobile unit].” Wolken says.

Wolken’s plan is to build a fleet of trucks and disperse them like a web over the next three years to find ideal locations for his rooted physical outlets, thereby replacing site-selection guess work with in-depth research. The first truck will hit the road in early May, and he hopes to have a second Gandolfo’s truck operating by the end of May and a third hitting the streets of Dallas by summer’s end.

Functioning as a moving billboard in Dallas, which is a new market for Gandolfo’s, the deli trucks will help the eatery build name recongnition and menu trials. Targeting Gandolfo’s fast-casual clientele, Wolken’s trucks will travel to office complexes, socces fields, and community festivals serving a menu of sandwiches, salads, and desserts mirroring Gandolfo’s dine-in offerings.

“For less than $100,000, I’m on the ground looking for a location and generating revenue, as well as a customer base,” Wolken says.

Given the day’s financing constraints, Pool’s leadership says their truck-franchising model will attract new franchisees and help them succeed in both site selection and financing for brick-and-mortar units. In addition, operators can run a food truck while their store in underconstruction, thereby gaining revenue, notoriety, and momentum before the store opens.

“With the truck concept, [franchisees] will have the ability to reconfirm that a specific site is going to be a fine location before they commit to the space,” Pool’s Restaurant Group CEO Dan Pool says. “Plus, you’ll have the ability to go to a lender with an assortment of info and data that you otherwise wouldn’t be able to bring them.”

It’s not just Pool’s newest franchisees entering the mobile restaurant game. An Oceanside, California based franchisee, among the Gandolfo’s system’s most successful, has ordered   a food truck as well. With the franchisee’s physical location serving as the kitchen, Pool’s executives say the franchisee can boost overall revenue 50 percent with the mobile unit addition. In the coming months, Gandolfo’s franchisees in California, Idaho, Florida, Georgia, and Utah are expected to join the mobile program. Another Pool’s concepts, Petro’s Chili & Chips, will also launch a food truck franchising program.

While intrigued by the concept of franchising trucks and the programs creative advantages, Mark Siebert, head of Chicago-based franchise consultant firm iFranchise Group, says he is hesitant to believe Pool’s model will be widely successful. The mobile business’ success resides in the operator’s ability to get from one place to the next, often dealing with uncontrolable variables such as weather, mechanical, and enforcement.

“Not everybody is going to let you park in a lot,” Siebert says,

Siebert says there are also concerns from the franchisor’s perspective in a program like Gandolfo’s. With trucks expected to produce lower revenue numbers than a brick-and-mortar store, less money will roll into the corporate office; franchisee expectations for headquarters support, meanwhile, are unlikely to waver. In addition, companies can get into messy agreements with franchisees who migh resist opening a physical location given lack-luster truck performance, thereby slowing the brand’s overall development.

“My inclination is to like the idea,” Siebert says,”but I feel the need for an extra level of diligence on both sides in crafting the nature of the relationship with regards to legal, operational, financial, and quality control issues.”

Pool, who acknowledges that his company will soon have to address such issues, answers critics’ reservations with a slice of history and unshakable confidence in his company’s program.

“When fast casual first came out, you had tons of people questioning the segment’s validity, but look where it is today,” he says. “I believe gourmet food trucks will hit as hard and fast as fast casual and I beleive that we can be a leader on the scene.”